Week Four is a major town for the party to exist outside of the dungeon, with plenty of places to explore and people to talk to. 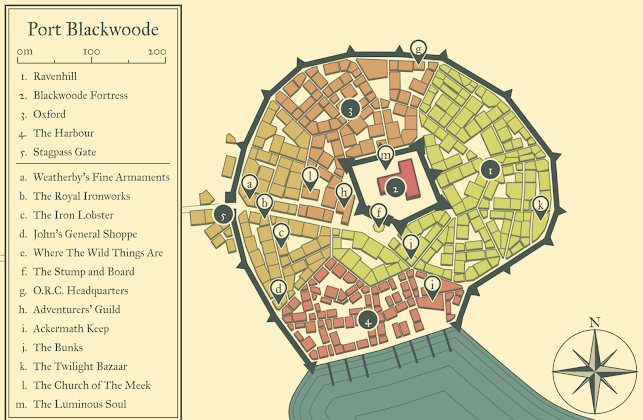 1. Ravenhill: The largest district of the city, comprising almost entirely of residential houses and community services.

2. Blackwoode Fortress: This district is composed only of Lord Theodore Blackwoode’s castle and the dwellings of its support staff. It also houses The Luminous Soul. The true heart of the city and first area built.

3. Oxford: this district is made up of academic buildings, as the Lord of the city is quite generous to the city’s educated folk. Many of these places have strange research laboratories doing obscure or nonsensical work in an effort to understand Zorn.

4. The Harbour: This district contains all the cities warehouses, logistics, and support, used to bring in supplies from the outside world, as well as maintain the city and ships that keep everything running smoothly.

5. Stagpass Gate: This district holds almost all of the city’s commercial business. Despite being the most recently built, it is also the most developed of the city.

a. Weatherby’s Fine Armaments: This shop, owned by Peter Weatherby, supplies most of the city with weaponry. The shop handles everything from generic orders to custom fabrication to repair. Wares tend to be a bit expensive here though.

b. The Royal Ironworks: This is the only place in the city where melted is worked. Managed by a British knight, this place is well known for buying old metal to reuse, as well as selling armor and forging services.

c. The Iron Lobster: This is the finest restaurant in all of Port Blackwoode. Their main specialty is the lobster from just off the coast, delicious but covered in a shell as strong as iron. They might also be willing to buy or appraise interesting ingredients if brought to them fresh.

d. John’s General Shop: This is one of the many general stores within Stagpass. Many adventurers widely believe John’s to be the most reputable source for adventuring gear. His wares may be pricey but many adventurers have learned the hard way that buying cheap rope may be the final nail in their coffin.

e. Where the Wild Things Are: Few will find a shop as strange as this one, even within Zorn. Run by a man named Maurice, this store contains plenty of “domesticated” animals and supplies to keep them fed and “safe”. The most popular of which is a species of large and vicious dog-like creatures called ashmongrels for their furless and ashy hide.

f. The Stump and Board: This plaza has a large stump in the very center, right in front of the Lord’s mansion gate, a large notice board is posted right on the fortress walls beside it. This place is used both for large public gatherings and announcements, as well as a common meetup spot for adventurers and other residents of the city.

g. O.R.C. Headquarters: This is the main building for a very secretive and exclusive scholarly group known as the O.R.C., the Occult Research Coalition. Their public goal is to study the strange magicks and other effects on Zorn, but many claim that there is a more sinister side to their research.

h. Adventurers’ Guild: This building is where the main body of Zorn’s independent adventuring guild is located. Here, adventurers gather to buy, sell, and trade information, equipment, and other services. Signing up for the guild is costly but useful, and in some cases, necessary as guild jobs are one of the surest ways a budding adventurer is going to make any kind of money without getting very lucky.

i. Ackermath Keep: This keep was built to house and feed British soldiers in case the city came under attack. Now that the adventurers guild is providing most of the active protection of the city, the soldiers themselves are making use of their free time about the city. The military power that this keep is in charge of is enough to threaten Lord Blackwoode, and relations between him and foreign powers are tense.

j. The Bunks: This area comprises a series of small, cramped bunkhouses with a small kitchen available for those eating on a budget. Sleep and rations are cheap but horrible here. The Adventurers’ Guild will pay for food and lodging for any adventurers who need it.

k. The Twilight Bazaar: An open secret among the residents of Ravenhill, this large building is abandoned most of the time, but once a week for a couple hours near twilight, this building bustles with merchants peddling all sorts of goods. These goods range from everything from the mundane to the magical, the legal to the illicit, and everything in between.

l. The Church of the Meek: the largest church of the town. This small church preaches about the dangers of Zorn and how we should all refrain from agitating it. They speak of how unnatural and otherworldly it is and how it will kill us all if we do not treat it with the respect and caution that it demands. Most of its followers are former adventurers, broken from past journeys in. Many people find the sentiment of them to be crazy and ridiculous, but the church is popular nonetheless as they have been known to provide charity to adventurers, particularly the injured and poor.

m. The Luminous Soul: a giant spire of glowing crystal that stretches deep into the sky. This is why Lord Blackwoode settled here. It is common knowledge that it protects the city and its inhabitants, though only Lord Blackwoode knows exactly how and why. Dark rumors occasionally circulate that the crystal has a much more sinister purpose and intention but these rumors are almost always laughed off as foolish and wrong.

Ruminate Upon My Writings

Week Four is a major town for the party to exist outside of the dungeon, with plenty of places to explore and people to talk to. Week Three...